I began working with Father Gerry Guillet in the early 1990s, soon after I moved back to Vancouver from Winnipeg. Gerry is a Catholic priest from the Oblates of Mary Immaculate. The order hired me to work with Gerry to document some of their work with First Nations. Gerry had taken up videography and had already begun shooting footage and capturing some wonderful stories. We would later bring in a team from Star Film and Video as well. We worked together for several years and did a number of films, including a four part series on various aspects of the wonderful healing work the Oblates were doing, in collaboration with First Nations. The films ran on Knowledge Network, Vision and a local cable program.

The focus of much of our filming was on Meares Island, just off the coast of Tofino, where the former Christie Indian Residential School had been turned into a drug and alcohol treatment centre called Ka Ka Wis. The subject was, of course, fraught with potential controversy, given that many of the abuses that took place at residential schools were surfacing and very much in the news. But all of the priests, sisters and brothers I came into contact with there, who had worked at the Christie school, were clearly beloved, including and maybe especially, Gerry. They were a delightful and fun bunch, always joking, laughing and playing pranks on each other.

We began filming in the area in 1993, during the heat of the battle to prevent logging in  Clayquot Sound. It was a powerful time to be there. A powerful place to be in. The First Nations call Meares Island a power spot and I experienced its effects first hand. I had expected to be the film director, an observer, but it’s impossible to be a bystander during sage cleansings and other healing ceremonies. Even watching someone else experience a healing can have a transformative effect on the witness. A kind of mirror effect. 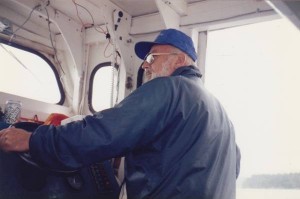 It was a beautiful, sacred, joyful time in my life. One for which I am very grateful. I feel especially blessed for my friendship with Father Gerry. He had a profound impact on my life. Our friendship continues to this day, mostly through email exchanges now.

Gerry is 75 today and despite health issues, continues to celebrate masses three times a week in Seabird and Chehalis. To me Gerry epitomizes what it means to be religious. He is kind, compassionate, faithful, devoted to a higher purpose and dedicated to serving others. He never imposes his views on anyone and is always open and willing to listen and learn from others.

He also happens to be responsible for connecting me with some of my relatives in Tofino. A native branch I never knew I had. But that’s a story for another day.