When I was writing the chapter on international aid for my latest book, I relied heavily on two reports out of the Oakland Institute and also interviewed Anuradha Mittal, the executive director. The Oakland Institute is a think tank based in, where else, Oakland, California. They focus on social, economic and environmental policy issues and have done a lot of work on the topic of food security. They’ve recently released another excellent report out of the Global Development and Environment Institute and the Institute for Agriculture and Trade Policy, this one is called “Resolving the Food Crisis: Assessing Global Policy Reforms Since 2007”. Authors Timothy A. Wise and Sophia Murphy look at the spikes in global food prices and how the 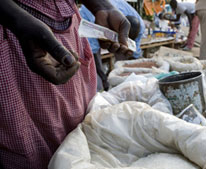 international community responded to the crisis. They acknowledge some of the important policies that were implemented, but identify deeper structural reforms that must take place to avoid a recurrence of the 2007-8 and 2010-11 crises. Their assessment looks at policies implemented by the UN, the G-20, the World Bank and international donors. While they applaud the increased attention to agricultural development, especially small-scale farmers and the effects of climate change on farming, policy reforms still fall short. The three main areas of concern are: financial speculation on the commodities market and it’s

susceptibility to wild price swings; the amount of land used to grow biofuels; and the rampant land grab primarily by corporations that has forced many small farmers off their land in developing countries. The authors offer concrete proposals, for example, to increase the use of food reserves to limit volatility on the commodities market, to further develop agriculture in order to reduce dependence on food imports. The onus is on rich countries, they say, it is their agricultural policies that most contribute to the fragility and volatility of the global food system.

There are many other reports and policy briefs on their web site if you are inclined to delve deeper into the topics of land grabs, international aid and more. The organization welcomes donations, so if you are able, please support their excellent work.