Sorting out from my trip to Portland. I’ll be writing about the many highlights of the Community Food Security Coalition Food Policy conference in the coming weeks. Here are a few reasons why Portland is giving Vancouver (BC, not the one across the river from Portland) a run for our money in terms of being the greenest city. 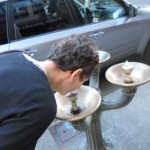 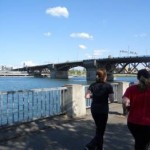 Really terrific streetcar system with a friendly name: Max. Very easy to get around too and they have a free zone – which we were in most of the time. Apparently the transit authority taxes businesses to pay for it. Like us, they run on the honour system when it comes to

paid fares, and like us, they run at a deficit. I was confused however by the female voice who would instruct us to exit at her right. As we couldn’t see where she was, it was impossible to tell just which side her right was on.

There are recycle bins everywhere on the streets – and they even take tin cans – which there were a lot of. Not sure why people are walking around with tin cans. Although I had one – left over from the food train. The street food is vibrant and lived up to its reputation. 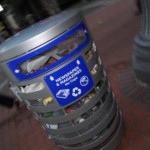 Also, I’ve never seen so many tattooed people in one place. When I asked a cab driver why that is, he says they’re all conformists who moved to Portland because it was a hip city. It is hip and green and full of foodies. There’s a very hip, satirical internet series called Portlandia that shows just how hip they are. But that influx of people, tattoed or otherwise, is causing some problems.

Portland also has the second highest hunger rate in the US (might explain all those pork and bean cans in recycle bins). Vancouver take note. It’s cool to be green, but let’s not get so hip that only rich people can afford to live here.