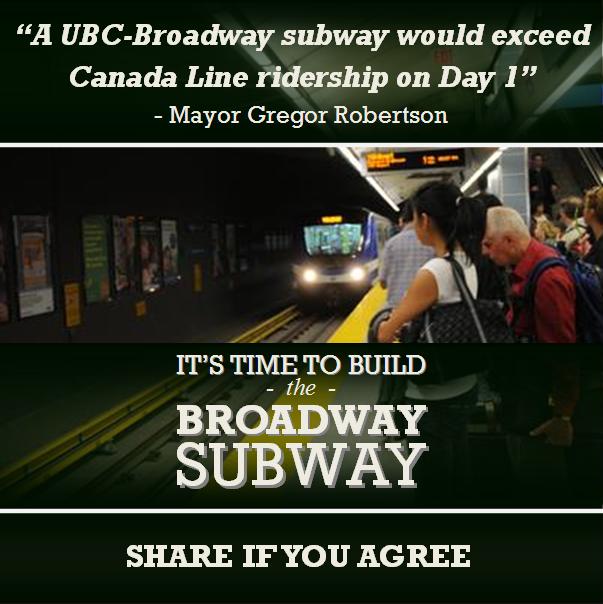 Last week I received an email from the Mayor of Vancouver about a study that was just released by KPMG “that demonstrates the urgent economic need for a new subway line on the UBC-Broadway corridor.” He says he is hoping I will help spread the word. Well, I will spread the word, but not in the way he is hoping.

I don’t believe we need a below ground SkyTrain line and have written frequently about an alternative here proposed by Patrick Condon. Patrick is a senior researcher at the University of British Columbia’s (UBC) Design Centre for Sustainability. This sustainable community design expert makes a strong case for installing a tram system like the one in Portland, Oregon; a similar system would be up to 25% cheaper than the proposed subway line and would contribute more to the street life. For some reason, his plan has never been on the table, his own university administration has never even asked his opinion. When I asked Translink staff about Patrick’s plan at one of their public consultation meetings a couple years ago, I got the wide-eyed (I can’t speak about it) stares.

I like a lot of what Vision Vancouver has been doing (except for the fact that they haven’t put my bus stop back in yet). I’m all for becoming the greenest city, but I’m not sure that’s what this subway line is really about. I think it has a whole lot to do with developing that Broadway corridor and increa$ing den$ity. The fact that the City chose an accounting firm to do this report speaks volumes. That is, unless KPMG are true sustainability practitioners, using triple bottom line accounting to assess the social and environmental effects as well as the economic. A first glance through the full report, called The UBC-Broadway Corridor – Unlocking the Economic Potential says they are only concerned with economics.

Here’s what concerns me, the aggressive tone of both the email announcement and the recorded phone call I got from Councillor Geoff Meggs. It didn’t sound at all like the party I mostly voted for. The urgent, it’s-our-way-or-the-highway tone implies there is no time or room for careful consideration.

Here are my questions: Who is advising the Vision team on this very expensive initiative? What is really behind it? Who’s really benefitting here? What’s in it for UBC? And why is the media supporting this so enthusiastically (just google ubc broadway subway and you’ll see what I mean)?

Thankfully, there is one media outlet that provides another perspective, the Tyee. Patrick has an article in today’s issue. His most recent work on costs can be found in another Tyee article.

God help those poor businesses along Broadway. Have we learned no lessons from the Canada Line fiasco? One casualty was the Tomato Fresh Food Cafe. The restaurant moved from Cambie Street to Broadway, but was never able to make a go there. The owners closed their doors in 2011, bet they’re glad they did. And what about the Evergreen Line to the tri-cities, does that line get shoved aside by Vancouver’s priorities again? Anyone have any answers for me?

Here are a few of my related posts on the proposed Broadway SkyTrain line:

A Beautiful Day in the Neighbourhood