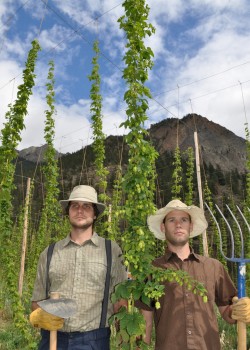 I don’t drink. So it came as a big surprise to be writing about beer and getting downright intoxicated by the story Sam Quinlan had to tell me. Sam and his business partner, Tim Hazard met at Simon Fraser University (SFU) where they were both working on their Masters. Not in brewing, but in wildlife ecology. In fact, Sam tells me, they see themselves as biologists first and farmers second. Their blog subhead reads: two biologists farm organic hops in the hottest place in Canada – Lillooet, BC. I was surprised to hear that Lillooet could claim that fame.

So how did two young biologists wind up growing hops? Seems they both had a dream to own a microbrewery one day. When they found out the dream was shared, the idea caught fire. Tim proposed they start by growing hops.

“We’d never seen a hop plant, didn’t know how to grow them. I think I spent more time researching hops than yellow warblers during the six months I was working on my thesis,” Sam says. There was a lot of beer research too. He and Tim were housemates, living in a house full of biologists who were only too happy to participate in the beer and brainstorm sessions.

It all happened very fast. And serendipity lent a hand at every turn. Another SFU friend who was doing PhD fieldwork in Lillooet got them interested in the region. It was affordable and the hot dry climate seemed ideal for growing many hop varieties. They bought the first property they were shown there in December of 2008.

“As soon as I saw that plot of land I knew that it would make a perfect hop farm and microbrewery,” Sam said.

“But how could you envision something you’d never really seen?” I asked.

“The internet is a wonderful thing, I saw pictures and read articles,” said Sam. But the best help came from Rebecca Kneen at Crannóg Ales, a certified organic farmhouse microbrewery in Sorrento. Kneen had developed a one-stop-hop-shop manual that Sam claims they could not have done without. They bought rootstock from her too.

The first year they had to clear the one-acre parcel they planned to cultivate. It was in virgin condition, full of rocks and needed lots of organic amendments. There was plenty of other work too, constructing the eighteen foot high trellises, putting in irrigation systems, buying equipment and materials. They got some funding through Farm Credit Canada and mentoring and use of a tractor from a neighbouring farmer.

“We would not be where we are without the people in town,” said Sam. And their friends who regularly make the commute from Vancouver to help out. He even turned his recent thirtieth birthday into a work party. The work becomes a great social event and the reward at the end of each day is home brewed beer. The brew some twosome featured some of that beer at an investors night during the Olympics at BC Pavilion in Robson Square.

This spring they got their first 1000 plants into the ground. They’re testing thirteen different varieties to see which ones are best suited to the conditions. They’ve consulted with BC microbreweries along the way to make sure they are on target for market demand. They have their first sales lined up for post harvest this fall. Two breweries will buy fresh hops to add to their specialty harvest ales. Hops are usually sold dried, but these seasonal beers require the fresh cones. They also plan to sell hops to home brewers. They have transitional status with PACS and will harvest their first certified crop in the fall of 2011.

“So what are the biggest challenges you’ve had?” I ask.

“The extreme commute,” says Sam. They make the three and a half hour drive every weekend. They both work full time in Vancouver. Friends and neighbours look after the farm when they’re not there.

“Exercising,” he laughs. “I woke up this morning and all my muscles were sore from digging 150 holes on the weekend. I don’t need a gym membership, I get all the vitamin D and fresh air I need. I have a great tan. I interact with my friends in a different way. Even though I am getting free labour out of them, they love getting out of the city too.”

“What exactly is a bine?” I wanted to know.

“A deciduous vine,” he answers with biological enthusiasm. “And hops add the bitterness to beer. Bitter – bine. Tim came up with the name.” Nice – definition and alliteration.

As the author of the Bitterbine blog, it is clear Sam is a wordsmith too. When I comment on his writing abilities and knack for slogans, he admits he may be a closet ad guy. “I can’t stop thinking about stories, labels and brand names,” he says. 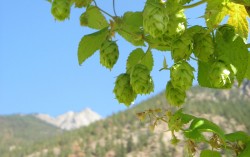 They positioned their Olympic beer as zero mile. “The hops were grown here. The spring water we used was on site. And Lillooet is at zero mile on the Cariboo Highway.”

This article was originally published in BC Organic Grower Magazine, Fall 2010, Volume 13, Issue 4.