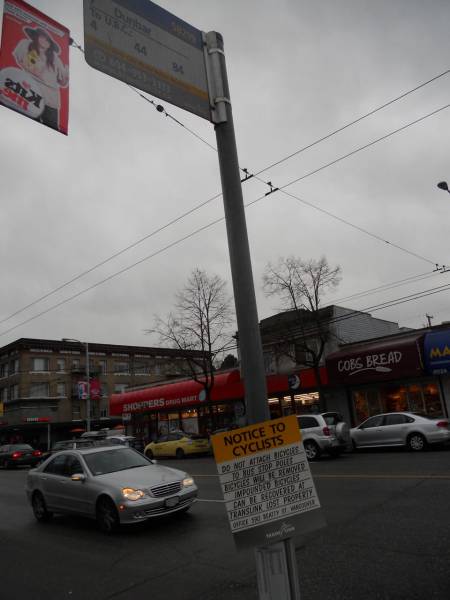 I saw this sign at a bus stop near my place recently. At first I was a little annoyed. Why shouldn’t people lock their bikes to the bus stop sign – especially when there are so few bike racks along 4th Avenue? But then I spoke to a bus driver and he gave me some very good reasons why not. For example, a bike could get snagged by the bus, take out the sign and the whole line-up of people. Note that the driver I was speaking to was parked up at UBC at the time, on a break, and not driving!

While the driver was on his gruesome story roll, he gave me a few more tips on how to avoid these kinds of accidents. If you’ve just missed the bus and it has pulled away from the curb, do not run ahead and then lean in to wave at the driver through the front window. A woman had tried that the day before, with dire consequences. If you think the bus driver is just being mean and is ignoring you, it’s probably not the case. There are blind spots. The driver made me stand on his bus and try to see him when he was standing just to the front and side of the bus. He just disappeared from view. Another no-no is stepping out from the curb to put your bike on the bike rack before the bus has come to a stop. Yes, people do it all the time. And yes, terrible accidents have occurred.

This good advice does not change the fact that we do need more bike racks in this city. Why not add bike racks to the bus shelters? Sounds like something the City and Translink could partner on.