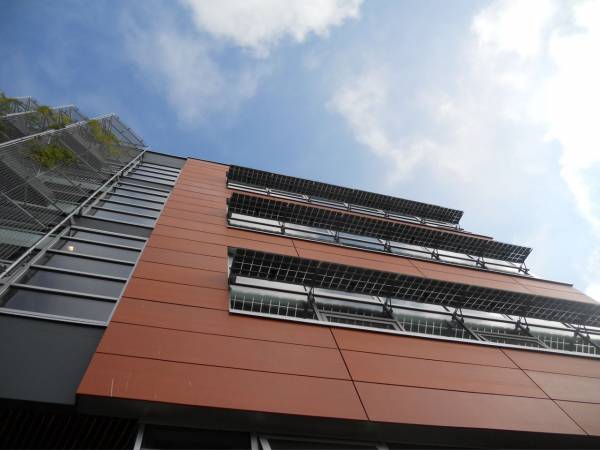 In early 2006, I was attending monthly Metro Vancouver breakfast meetings focused on the United Nations World Urban Forum that would take place in June that year. I was planning Green Scenes with the Centre for Sustainable Community Development at Simon Fraser University and would be premiering some of the tours at the United Nations event. At one meeting, a UBC professor named John Robinson spoke about a plan to integrate several universities on one campus. The new university was going to be called the Centre for Interactive Research on Sustainability (CIRS) and the location was to be Great Northern Way, where BCIT already had its Centre for Architectural Ecology. Zoom ahead to 2012, and there is no new integrated university at the Great Northern site, but CIRS is alive and well and living at the University of British Columbia (UBC). It opened its doors a year ago. You can read about its evolution here.

Yesterday, I visited with John Robinson, Associate Provost, the man responsible for sustainability across the entire UBC Vancouver campus, at his CIRS office. I also had a look around this very impressive four-storey, 5675 square metre building, made of sustainable wood. You can tell the building is something special as you approach. First of all I noticed the huge number of bikes parked out front. I did find it a little tricky to lock my bike up to their bike racks though. Then I noticed that there are plants growing on the outside of the building. There’s a green roof too. The building’s ventilation system is the wind, yes the windows open, allowing fresh air to cross ventilate. Rainwater is harvested from the roof and stored in a cistern. The water is filtered and treated on-site and pumped back through the building – a fresh supply of potable water pouring out of the taps for the “inhabitants” (students and residents) of the building.

CIRS has not only reduced its environmental impact, but contributes to the environment by putting energy and water back into it. The building is powered by drawing on a variety of energy sources: geothermal, solar and waste heat. Not only does it meet its own power needs, but it supplies neighbouring buildings as well, and significantly reduces UBCs annual overall energy consumption. The building sits on Sustainability Street, a demonstration of closed-loop storm water collection and wastewater treatment.

The original vision, to be a centre for multidisciplinary education and research, a kind of living laboratory, has held true. John told me they are beginning to analyze data collected from the building. When I asked what the next step for the university was in terms of advancing sustainability, he said, for the whole campus to become the living lab. Ya gotta love that vision. So happy to be on campus while these sustainability transformations are taking place. You can take a tour of CIRS and other green buildings on campus. More info here.

One Reply to “To CIRS With Love”