Jules Hou and his family, including his parents, immigrated to Canada from Taiwan 17 years ago. When they arrived in BC, farming offered the simplest pathway to a new livelihood. Back home trees and plants were prized commodities, so they decided to start a nursery. Jules had a biology background, but no farming experience. He worked in a chocolate factory before emigrating.

The family struggled to make a go of it and Jules’ parents weren’t acclimating that well. They were living in Langley, far from the urban amenities that they were used to in Kaohsiung City. They especially missed the food, one regular menu item in particular, fresh mushrooms.

“My grandpa loves mushrooms,” says Jules’ son, Hao-Che. His father doesn’t speak much English, so he is telling me the story.

In Taiwan, fresh shiitake mushrooms are an everyday occurrence, eaten in countless dishes and delicacies. They are also thought to have medicinal properties. Jules’ mother suffered from hyperglycemia and several other ailments, her naturopath back home had prescribed shiitakes to increase vitality. Trouble was they could only find imported varieties from China that smelled bad (a sign that they are not fresh) or dried ones, even in Vancouver’s Chinatown, which was flourishing back then. Jules saw a market opportunity and a way to give his parents something that would make them feel like they belonged. He decided to start a mushroom farm, again with no experience.

They sold the nursery and began to look for an existing farm, but all the farms at that time were growing 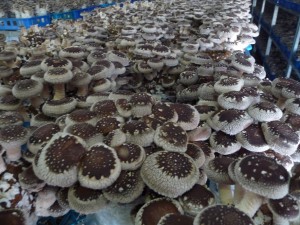 button mushrooms, a very different mushroom and a different process. Shiitakes grow on trees or decomposed wood, button mushrooms are grown in soil, need manure and a lot of chemicals. Fortunately, they finally found a shiitake farm, owned by a Japanese grower who was planning to retire. He mentored them. The process was much more complicated and time consuming than they had anticipated.

“It was all done by hand back then, we had no machinery,” says Hao-Che.  After school, he and his younger sister would have to make up to 16 mushroom blocks. That’s the first step in the process of growing wood-based mushrooms like shiitake. The children would mix sawdust and wheat bran together, shaping and pressing it into blocks, each block the size of a shoebox. It took a year before one block would start producing. When Jules took over the farm, the previous owner had seven or eight customers, they ended up with only two or three who actually bought from them.

“We didn’t have a heater or cooler. We’d have to look to the sky to see what the weather was going to be like, what the conditions were,” says Hao-Che. Jules travelled to Taiwan, Japan and China to learn more about growing mushrooms. Problem was, the weather there is very warm and the growing conditions are very different. More problematic, there was no one person to go to, in Asia each farmer specializes in one procedure. You have to learn from a different master at each stage of production. And the process for growing different mushrooms also varies. 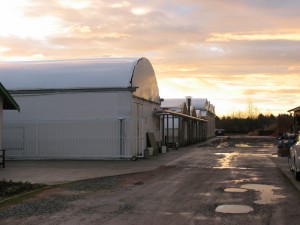 For shiitakes, after the blocks are sterilized in a kind of pressure cooker, they are taken out to cool. Then each cube is inoculated with a mycelium strand, the fungi that grows the fruit or mushroom. During the spawning stage, the mycelium grows throughout the entire cube. The cube starts out brown-coloured, looking like wet wood, and by the end of the spawning stage (about six months), the cube is white. After spawning, the cubes are taken to the flushing barns. Hao-Che tells me the buildings where the mushrooms grow are kind of a hybrid, part barn, part greenhouse, they have a steel frame with plastic covering. Inside, the humidity, temperature, and lighting are all controlled and the mushrooms begin to grow. The first flush (harvest) happens after about two weeks, then every four weeks after that. There are three to four flushes for each cube.

Hao-Che admits it was a tough ten years with a huge learning curve for his father. To make it even more challenging, he decided to grow organically. It didn’t make sense to Jules to add chemicals when this was really about providing natural medicines for his mother. There were no organic mushroom farms in BC at the time and it was not a common practice in Taiwan either. Conventional mushroom farmers were critical and local health authorities made frequent inspections. Nevertheless they persevered and the farm is now certified by Fraser Valley Organic Producers Association.

The plant now occupies about three of the 16 acre farm. Over the years they renovated and added new buildings, moving from hand production to automated. They have around 30 regular staff, including scientists who maintain the mycelium strands, as well as agricultural interns and WOOFERs. Asia Pacific Farm is now the largest Canadian producer of high quality, organic, specialty mushrooms, growing eight different varieties of mushrooms including shiitake, oyster, reishi, pompom and King Oyster. They sell to a number of wholesale distributors as well as to high-end Japanese restaurants like Tojo’s and Zest in Vancouver. Thanks to these organic mushroom pioneers we have fresh, health-giving mushrooms on our plates year round.