I’ve been going through past projects to create a project highlights page for my site. When I was working for the Rivershed Society of BC (RSBC), we launched a campaign that I feel very proud of, called the SalmonTrain. This is how it came about.

The Stream of Dreams Murals Society, the group that puts all those cool, coloured fish on school fences was one of our community partners for Project Rivershed Brunette. For a long time, they had wanted to create a mural in motion on one of the SkyTrain cars. Fortunately, we were able to help them make it happen. Together, we pitched the idea to Translink and they gave it an enthusiastic nod. Lamar Advertising came on board too, bringing 3M Canada along to sponsor the inside of the train.

The campaign morphed into a multi-layered project. There was the exterior mural, the entire train wrapped in colourful “dream fish.” The fish were selected from children’s artworks gathered in schools. There were ceiling posters and a floor mural, where passengers stepped into a stream. Gilmore, one of the SkyTrain stations (we loved the gill reference), also had floor and wall murals. 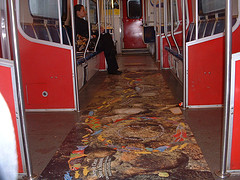 The campaign was built around the slogan: Take the Train. Save a Salmon. The accompanying brochure and website listed nine actions people could take to help save salmon in their rivershed, like: Scoop the Poop. Mark a Drain. Sweep the Drive. Sadly the website page was taken down before I knew how to take a screen shot.

We launched at a World Rivers Day event in Burnaby, right near Gilmore Station. Everyone cheered each time the SalmonTrain went by. We had a booth set up and were running tours of Still Creek. A few members of the Still Moon Arts Society dressed in fishy costumes carrying salmon lanterns stopped by. They were riding the SalmonTrain all day, hopping off at random stations to do spontaneous salmon-themed performances.

We got some great press, thanks in no small way to Translink who used their media network to promote the SalmonTrain. Our website hits tripled. The mural in motion ran through the Brunette for three months.

It took a dedicated team to pull this project off and everyone went above and beyond. With the limited funds available to non-profits (even more true today), the campaign was only possible thanks to the partnerships. In addition to our generous and enthusiastic corporate partners, Stream of Dreamers, Louise Towell and Joan Carne brought the concept to the table, provided important content and made many other valuable contributions along the way. Louise was

also the artist/illustrator for the exterior mural. Richelle Giberson of Grow Creative was the intrepid graphic designer and photographer. At one point she waded hip deep into a stream to get shots of a streambed for the floor mural. I wrote the copy and provided the overall creative direction. Fin Donnelly, Executive Director at the time, and other RSBC members provided technical information, feedback and of course time and money to get the project done.

The following year, we built on the campaign, focusing on climate change with the headline Keep it Cool. Save a Salmon. We didn’t have the SalmonTrain, but there was a brochure, accompanying website and new partners. We attended two events on World Rivers Day. At the Still Creek site, visitors could take a tour of the creek with us. At the BCIT Campus event, local rivershed tales were captured on video. We also ran a colouring contest with media partner Burnaby Now. All in all this well rounded, highly interactive campaign with unique forms of message delivery had a lot of steam.

You can see more great pics of the campaign here.