In early 1991, some friends of mine from California started a campaign to conserve oil. It was a response to the Persian Gulf War. As the pledge sheet said, whether you were for or against the conflict, it was clear that the need for oil was a central cause. The premise was that by reducing our dependency on oil, we could prevent future wars and bloodshed. 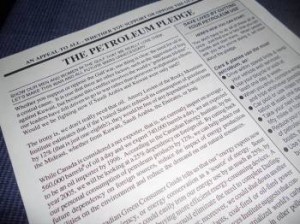 Back then Canada was consuming 1.5 million barrels of oil a day. We were considered a net exporter, that is, we imported around 560,000 barrels of oil a day and we exported 740,000 barrels. We were expected to be a net importer by 1996. Today we consume 2.3 million barrels a day, import 1.08 million and export 1.92 million (Source: CIA World Factbook). While the numbers have nearly doubled and the eastern half of Canada relies heavily on imported crude oil, we are still considered a net exporter.

In the information part of the pledge sheet, Amory Lovins of the Rocky Mountain Institute was quoted as saying if the U.S. reduced its use by a slim 12%, they would be free of their dependence on any Middle Eastern Country for oil. I inserted some Canadian stats too, the Canadian Green Consumer Guide claimed that “energy experts now regard energy efficiency, or energy conservation as a source of energy.” The authors said that a 25% reduction in energy use just in Ontario would eliminate the need to complete Darlington, the world’s largest nuclear power plant and would enable the province to shut down two smaller plants as well as some coal-fired and oil-fired power stations and hydro dams. The World Resources Institute said that through energy efficiency and conservation, we could cut our carbon emissions in half. Yes, we were talking about global warming back then. The pledge boldly stated that reducing our use of petroleum and petro chemical products was the single most valuable thing we could do to protect our health and environment. 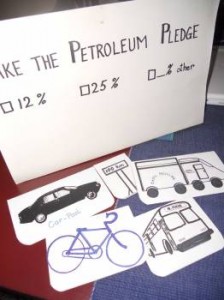 Just below the signature space, there were tick boxes where you committed to a percentage you were willing to cut your consumption by. There were tips to tell you how – most of them pretty familiar by now, ride a bike, buy food nearby, vacation close to home, car pool, use telephone and fax to replace business trips as much as possible.

That last one deserves a moment. I had to retype the original pledge that I received from my friends, because I had a hard copy of the original faxed to me, scanning wasn’t around or at least it wasn’t in my world yet, and we weren’t using email in my workplace. I typed it on a Xerox Memorywriter, a kind of precursor to the computer. I Canadianized it somewhat, copied it and began to distribute to family, friends, local politicians and religious leaders. I think I even set up at a community event – which would explain the signs I found in the file. 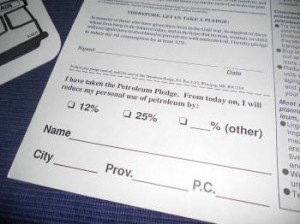 Two decades have passed and news from the Middle East hasn’t changed much, nor the warmongering tactics used by the governments of oil-dependent countries. Sure, we have a few electric cars around, we’ve switched to LED and compact flourescent bulbs, maybe we no longer drive to the corner store, but the numbers above expose our continued addiction to oil.

We may not have gotten the message too clearly around petroleum use, but the way we send messages has changed dramatically. The pledge might have gone viral if we’d had Facebook back then.