I swore I wasn’t going to become an organizer at my community garden. I would attend the monthly

work parties, but that would be it. I just wanted to garden, have my own compost bin, mind my own beeswax. That lasted about a week. I noticed on the day I was assigned my plot that the compost system wasn’t exactly a system. There was one communal bin – with basically a dump and run system. A lot of people were also just throwing their green waste onto the railway tracks. No trains run anymore, but it’s pretty unsightly and the neighbours living in the apartment towers weren’t impressed.

So today we built a swanky new three-bin system. Leading up to the big build, there was quite a bit of back and forthing over what wood to use (untreated cedar is best) and which hardware cloth (wire mesh) to line the bins with (1/2” will keep rats out, ¼” will keep mice out). We went with the half inch, sixteen gauge because it’s what the lumber store had in good supply. There were a few glitches with the plans and because of the (lack of ) building skills of us assistants. One of the gardeners brought us some red licorice to keep us going. Later a crow flew by with a red licorice dangling from its beak. 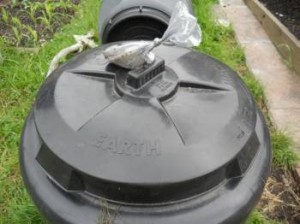 We stopped part way so that I could give a little compost workshop to some of my fellow gardeners. A mouse ran over my toe while I was talking. Looking for red licorice no doubt. There’s a bit of a rodent issue along those railway tracks – thus the rodent resistant bins. Quite a few people have the plastic Earth Machines, which the city sells for twenty-five bucks. You can make them more rodent resistant by putting a sheet of wire mesh under the bin. It’s a little harder to make them people resistant though. You can’t lock the bins, so anyone can dump and run. A big thanks to all you dog walkers who plop those nice little gifts on top of our compost bins. The compost police are now watching for you.