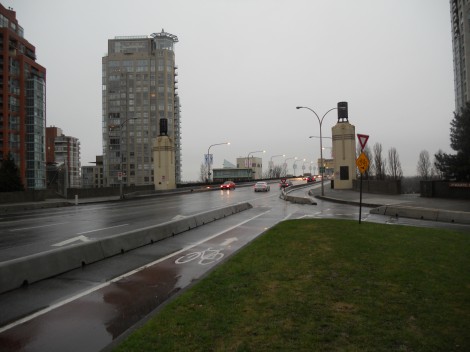 Our local government is installing separated bike lanes around the city as part of their goal to become the Greenest City in the world by 2010. I’m a recreational cyclist and I’m all for the new bike lanes, which make me feel much safer. I applaud the efforts, especially the trial lanes on the Burrard Bridge, where there have been so many accidents involving pedestrians and cyclists who formerly had to share narrow sidewalks. I was cycling with a friend years ago when he had to brake suddenly to avoid a pedestrian. He flipped over his handlebars and landed on the roadway. Miraculously, there were no cars coming. He injured his shoulder, but it could have been much worse. More people are riding since the lanes went in, there’s been a twenty-four percent increase since the pilot began in July 2009. So yes, I’m all for the lanes, but I do have a beef with a bus stop on Burrard that has been moved.

I don’t own a car, so walking and transit are my primary modes of transportation. I swim twice a week at the Vancouver Aquatic Centre and was surprised to see the south bound bus stop at Pacific and Burrard moved back two blocks. That stop is a central hub. It draws from the beach, Aquatic Centre, Yale Town and the West End, with a diverse ridership including moms with strollers, seniors, and people in wheelchairs. There’s an elder care home at Balsam and Cornwall, so some of those seniors are traveling to visit their loved ones. You learn a lot by waiting at bus stops.

It is the last stop before the bridge and so a long way from the next stop which is at Cypress, a block after the bridge. I now have to walk up the steps from the Aquatic Centre and nearly three blocks to get to the new bus stop. I miss busses constantly now because it’s that much further. And sprinting three blocks with a heavy, wet gym bag is no fun. On Sundays, the situation is even more problematic because there are fewer buses and the No. 22 is nearly always overcrowded. So if you miss one, you wait a long time for the next.

The existing sheltered bus stop sits at Burrard and Harwood. The new stop is at Burrard and Burnaby, a half block away from the Davie stop. The separated lane runs for two blocks, from Burrard and Pacific to Burrard and Drake. If the bike lane had just been installed for one block, as far as Harwood, then the bus stop could have been moved to the other side of Harwood (in front of Commercial Electronics), which would have had very minimal disruption for transit riders.

I understand that passengers do cross the new cycle tracks and board buses from the concrete medians at other stops. However, the median island must be wide enough to lower the wheelchair ramps. Currently, there isn’t the space to make the Burrard stop fully accessible.

I’m sure it has been a challenge to balance all interests, but hopefully the City, in concert with Translink, will consider revamping the median at the existing sheltered bus stop at Burrard and Pacific as part of the new transportation plan that they are developing this year. Otherwise, think I’ll start swimming across False Creek. Give the City your feedback on the dedicated bike lanes, bus stops and other green goals at Talk Green to Us.