Last summer I ran into Ward Teulon – “ the  City Farm Boy at my neighbourhood farmers’ market. Ward has 13 gardens scattered throughout the city, mostly in people’s backyards. One of his most productive sites is on the podium level of Freesia, a high rise development in the heart of downtown. The developers asked him to maintain the area after the community garden plots tended by residents didn’t exactly work out. He maintains 65 raised beds there and harvests weekly during the growing season. The produce is distributed through his Community Shared Agriculture program (CSA) and at farmers’ markets. At his stall that day he had carrots, mizuna, arugula, swiss chard and white radishes. I bought some of the radishes. I loved that this city farmer was selling his vegetables alongside the rural farmers. His city farming business has been so successful and gotten so much media attention that several other architects have contacted him to set up gardens in their buildings. 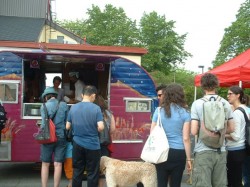 I bought a buckwheat crepe at La BohÃ¨me, stuffed with herbed squash, feta cheese and a fistful of organic greens. The line-up never stops from 10am to 2pm, the food is so delicious there. Made by a real French chef. From France not Quebec, as someone in the line-up once told me when I was waiting for my very first try some years ago at the Trout Lake Market – “ before my neighhourhood even had a market. The chef and his crew operate out of a funky, wine coloured trailer adorned with stars, moons and sheaves of wheat. World beat music blasts from its speakers. I practice my French at little bit with the chef when I’m there.

I sat on the grass on a glorious sunny day and felt very grateful to have this market in my neighbourhood, to be part of this scene with others who supported local farmers and wanted healthy local food. To be part of a community where the landscape was shifting.  I was half way through my crepe when a woman came and sat beside me. She glanced over at me.

“It gets a bit messy towards the end,” I said.

“I’ve never had one before,” she said.

“They’re made by a real French chef,” I say, “from France, not Quebec”.

She took her first bite and closed her eyes. The blue sky overhead, the sun shining down on all of us. Then she turned to me and said with wonder and gratitude in her eyes, “I just can’t believe this is happening!”